Each seal, along with the document to which it is attached, has been photographed by the team and its physical description and impression described using a standardised system of keywords. Each seal has also been imaged using a Foster and Freeman Crime-lite® Imager, a multi-spectral fingerprint capture and enhancement system, which allowed us to take 1:1 images suitable for forensic analysis.

So, how was the data for the project collected?

In the archives, the team essentially had three main tasks.

Task 1 constituted the most critical part of the data capture. The initial stage involved something of a balancing act as, while the project wanted as wide a variety of material as possible, it was also important that it could be drawn from collections which lent themselves to comparison. The team therefore examined the archival catalogues for groups of documents which might be connected by time and/or place. Frequently this involved focussing on groups of charters relating to particular manors or institutions, such the Almshouse of St. Ethelbert in Hereford. The selection was also filtered to include a good gender mix and a wide social range. While the greater survival of seals dating from the late 13th and early 14th century naturally led to their preponderance in the collections the team examined, care was taken to try and balance the chronological spread as evenly as possible. Once in the archive, the identified seals were assessed for visible prints. Seals on which prints were not visible to the naked eye or which were of insufficient quality were eliminated, as were those documents or seals judged in too poor a state of preserve to risk handling.

In order for the project to succeed it was imperative that the team possessed imaging equipment capable of reliably producing high quality images of ridge detail for use by the team’s fingerprint expert. While it is technically possible to get usable images with a standard camera, it is very difficult and time consuming to achieve. The project therefore chose to use the newly released Foster and Freeman Crime Lite Imager (CLI). Specifically designed for imaging prints, the CLI consists of a portable freestanding imaging unit, composed of a high resolution webcam (1000 pixels/inch) and multiple lights mounted around it capable of covering the full spectrum of wavelengths, including UV and infrared. 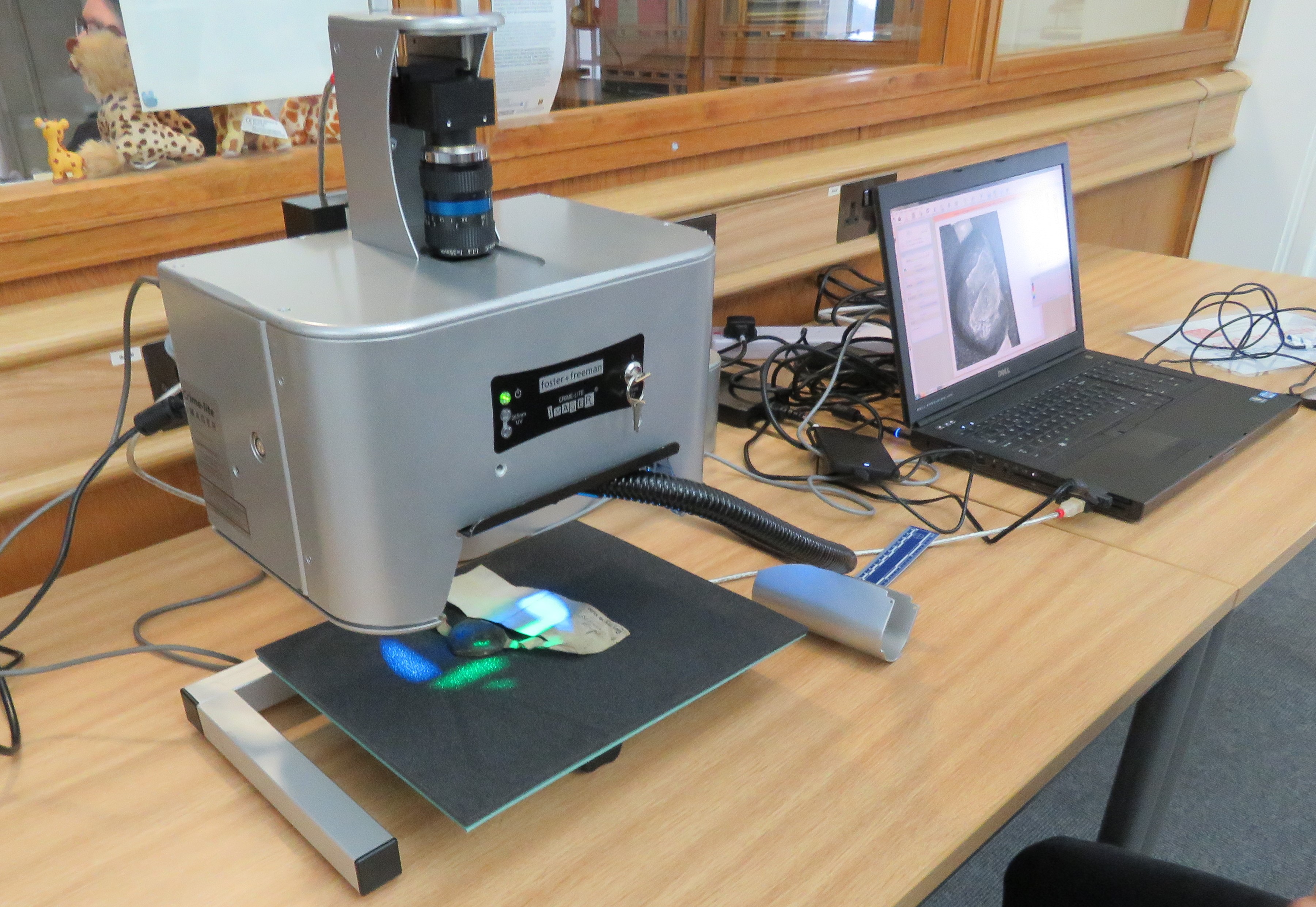 Crucially, from an archival perspective, the CLI could not damage the seals or charters. The CLI is able to use different coloured lights to help illuminate ridge detail. In particular, blue and green light tended to be very effective on a range of different wax colours. While the light may have been coloured though, the webcam of the imager captured its shots in black and white.

The seals themselves presented three major challenges when being imaged; their shape, the attached document, and the wax. Large and highly curved seals made it impossible to ensure that all ridge detail across the whole surface of the seal was in focus or even fully in view in one shot. The solution adopted was to tilt the plastizote upon which the document rested and to image the seal from multiple angles to provide the team’s fingerprint analyst with a series of overlapping images from which to work. The extent to which the seals were tilted was limited by preservation concerns, particularly for the integrity of the parchment tag or tongue by which the seal was attached. Documents with more than one attached seal presented an additional challenge, as it could be hard to manoeuvre the document to place the seal directly beneath the imager. 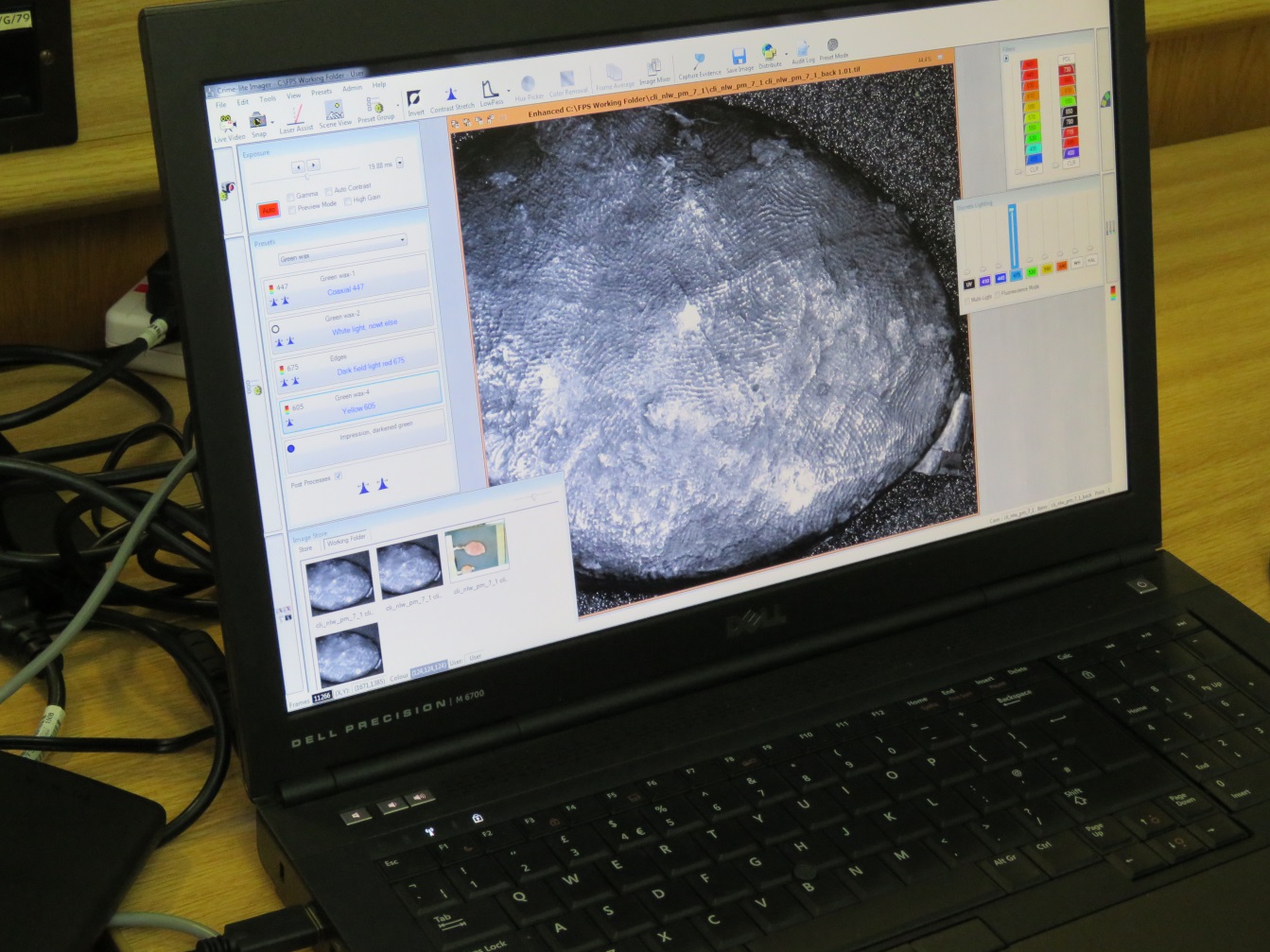 The lighting arrangements in each of the locations visited also varied considerably. This was not merely from place to place, but also from day to day. For example, poor natural light in the National Library of Wales, due both to the room’s design and the stormy winter weather, resulted in impractically high exposure times. Conversely, Hereford Cathedral Archives enjoyed far more natural light, but this meant that CLI operations were frequently affected by both the outside weather and the time of day.

A final problem faced by the team was camera shake. Slight vibrations effecting the CLI while it was busy capturing an image could result in blurring. This issue could be triggered by all sorts of things, including people walking nearby and even the activity of the other equipment next to it. The CLI therefore had to be positioned on a separate table, free from potential disturbance. The more solid the table and the floor the better. In Westminster Abbey Muniments room, the solid 13th century construction meant that there was no camera shake, even when the organ was playing! In other archives, due to the construction of the floors, it was necessary to wait until people had walked past before trying to take a shot.

In addition to the CLI images of the seals, standard digital photographs were also taken, both of the seal and the document. The details of both of these were catalogued on the project database. This included descriptions of the impression, the Legend, the colour of the wax, the date and brief summaries of the document contents and the parties involved.