A History of Sealing


Seals have been used as a means of communication, identification and authentication since the beginning of recorded history, and in fact are some of our earliest records. Seal impressions form Mesopotamia date back as far as 7,500 years ago, and sealing was widely practiced in the Ancient Near East, Egypt, the Indus Valley and China. Sealing was also practiced in Archaic and Classical Greece and in Republican and Imperial Rome, and through the latter the practice of validatory sealing (that is, attaching the impression of a matrix to document, to remain undamaged, as a means of authentication), as well as using seals of closure, spread across much of Europe. In Britain, there seems to have been a break in validatory sealing during the early Middle Ages, although matrices from the Anglo-Saxon period survive and these, along with occasional documentary references, suggest that seals of closure, or perhaps discrete seal impressions in wax or clay or matrices, used as tokens, were employed in this period.


The practice of attaching the impression of a seal matrix to a document as a means of authentication was (re)introduced to Britain by Edward the Confessor (1042-1066), probably influenced by a combination of sealing practices employed by the Papacy, the Byzantine Empire, the Holy Roman Empire and other polities in Western Europe. Unlike French and German royal models, however, Edward’s Great Seal matrix was designed to create impressions on both sides of a disc of wax to be suspended from the foot of a document, and this was the principal model adopted in medieval Britain. Having a double-sided seal also allowed the king to use a greater array of images and text to project aspects of his identity and power, and although double-sided matrices in the form of two plates designed to be used in conjunction with one another tended to be restricted mainly to governmental and institutional seals, the practice of using two different matrices on either side of a wax disc was, from the early-mid twelfth century, employed by leading ecclesiastics and nobles.


The traditional scholarly paradigm for the spread of validatory sealing across England and Wales used to be that the Great Seal prompted leading ecclesiastics, secular magnates and important institutions to adopt the practice in the late eleventh and early twelfth centuries, with this gradually filtering down through society, until even by the end of the thirteenth century even those of extremely modest standing sometimes owned and used seal matrices. More recently, scholars have begun to demonstrate that the situation was more complex and nuanced than this, with significant regional differences in how rapidly seals were adopted, and by whom. For example, Dr John McEwan has shown that secular Londoners were using seals for documentary validation before the middle of the twelfth century, while the AHRC Seals in Medieval Wales project revealed the apparently enthusiastic adoption of seals by the native Welsh uchelwr from the late twelfth century, despite the continued rejection of the sealed instrument as proof under Welsh law. The monastic orders, especially the Benedictines, Cistercians and Augustinians, also helped foster the widespread adoption of seals across society by demanding sealed documents as evidence of gifts and grants, and it would appear that, on occasion, religious houses provided matrices for those validating documents in their favour.


By the late thirteenth century, institutions, organisations, officials and office-holders, and individual men and women across society, from the king to an unfree peasant, were engaged in the practice of validatory sealing. 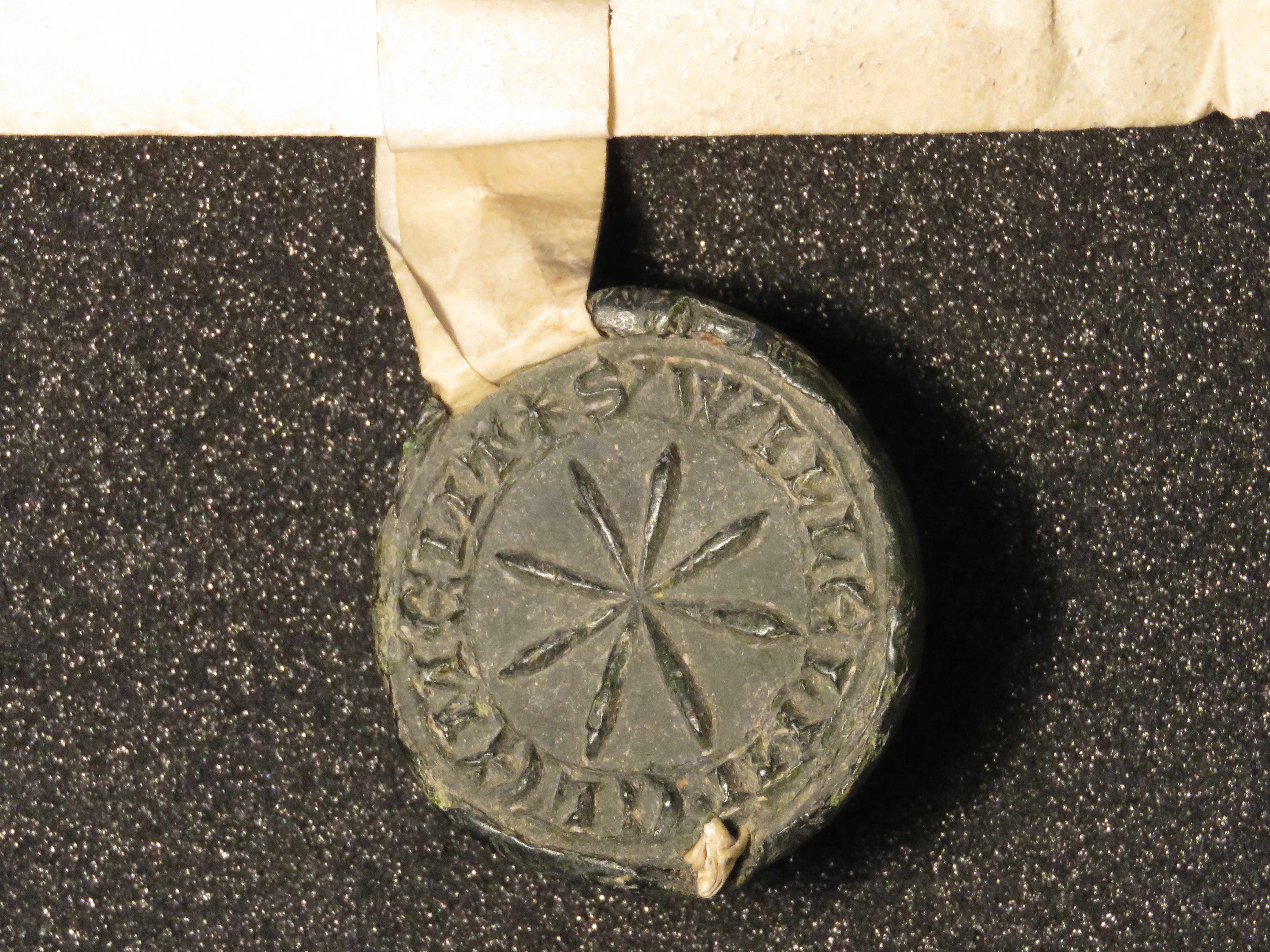 The seal of William Clement on HCA 221, dated 1271
This did not mean that everyone owned or even used a matrix of course, with a multitude of verbal agreements clearly continuing to happen, unfree land transferred without recourse to sealed instruments, and compurgation holding sway in various courts, but a ‘guesstimate’ of around forty percent of the population of England impressing seals at some point in their lives is perhaps realistic.

Just as documentary sealing reached its zenith in the late thirteenth and early fourteenth centuries, however, a couple of perplexing developments occurred. In the twelfth and early-to-mid thirteenth centuries, people who did not possess a matrix were sometimes required to authenticate through sealing, and documents validated in this manner generally record that they borrowed someone else’s matrix, or that another sigillant, often a social superior or an institution, impressed their seal on behalf of the person without a matrix. By the later thirteenth century, however, some documents which include a sealing clause stating that the person attesting it had impressed their own seal are, on closer inspection, clearly validated by the impression of a matrix made for someone other than the sigillant: in other words, people were borrowing each other’s seals without this being noted in the written record. Presumably this was considered acceptable because, if we accept that the list of testators as a true record, there were witnesses to the act of sealing who saw, and were expected to remember, that the sigillant had borrowed another’s matrix. At about the same time, the situation was complicated still further by an increasing prevalence of seal matrices with ‘anonymous’ legends, rather than text which identified them as belonging to a specific individual, and by the end of the fourteenth century a considerable number of matrices only had a single letter, or a motif with no text at all. 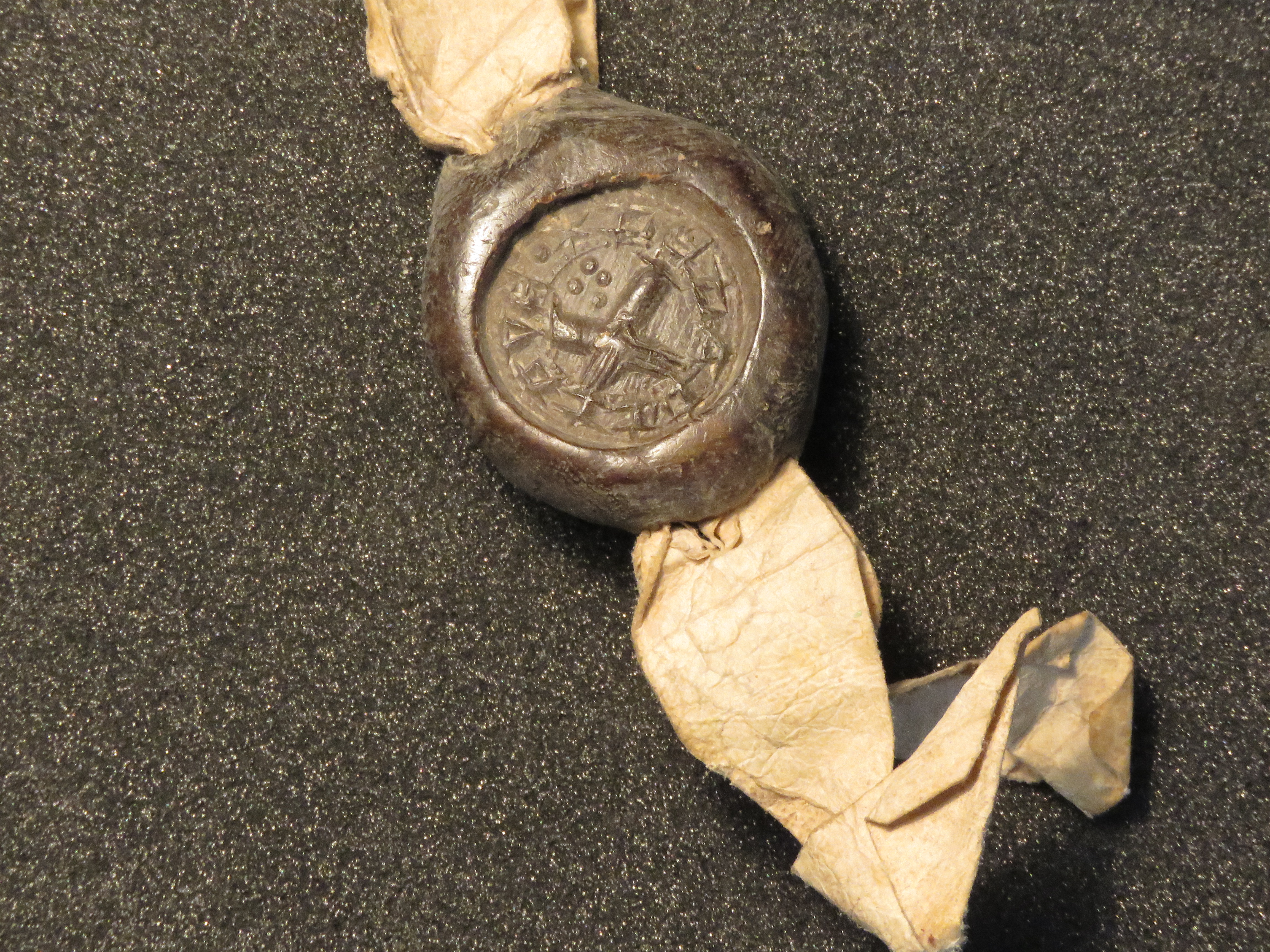 Officials, institutions, corporations and some individuals, especially higher up the social scale, continued to use clearly identifiable matrices until the end of the Middle Ages and beyond, but the unrecorded borrowing of matrices, or the use of one anonymous matrix, perhaps supplied by a scribe or clerk, by multiple sigillants, seems to have increased throughout the fifteenth century. At the same time, as a result in changes in land tenure, Common Law practice, the increasing prevalence of signatures and, perhaps, technology (the introduction of paper, which is too fragile securely to support pendant seals), the number of people engaging in documentary sealing gradually declined. The appending of a seal as a form of authentication continued throughout the Early Modern period and into modern times, however. Until the 2006 Companies Act allowed two (carefully regulated) signatures as an alternative means of validation, all companies registered in the UK were required to possess a seal matrix, for example, while the Great Seal is still attached to a number of documents, and many university degree certificates are sealed. It might also be suggested that the use of PINs and scans of eyes or fingerprints is a form of sealing, since they verify identity and provide security. Seals of closure remain in use in various contexts, including by the security services and HM Revenue and Customs. Having lasted for the whole of recorded history, seals are still with us and continue to make an impression.